Almost all Eunos Roadsters had power steering and air conditioning. It was an option in Japan to have no PAS. So a Eunos without PAS and Air-Conditioning is very rare indeed.

In the second half of the 1990s insurance companies became anti "Hot Hatch" and started increasing the insurance groups and premiums of all sporty cars. Mazda countered this by producing a special car. It is commonly referred to as the low power MX5. It had 90 bhp, instead of 115 bhp and had manual steering and manual windows It sold quite well and is probably one of the easiest MX5 MK1s to insure today.

We have completed many retro-fit power steering systems. It is becoming a common upgrade particularly on the UK cars.

The manual rack is slighty quicker, that is, it has less turns lock to lock than the power rack but its not as easy to use day to day - parking and slow speed manuvours are harder work.

And even in motorsport some feel that power steering has an advantage.

One of our hillclimb customers changed his manual steering to a power rack after driving a PAS equiped car. He decided it was easier to use and required less concentration when taking some of the tighter turns at Gurston Down. When time is of the essence, like a hillclimb or sprint, a few hundredths could be the difference between winning and being second, simple things like power steering change times. 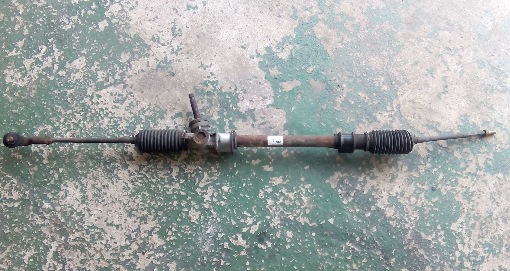 Removing the manual steering rack is a relatively simple task as long as the universal joint on the steering column comes out and the steering ball joints release. The car really needs to be in the air as the rack is mounted on the front sub-frame.

There is no difference between front sub-frames on Mk1 cars with or without power steering.

Once, the rack is out, the power steering rack needs preparing. The track rods are different so you can't re-use your manual ones. However, the track rod ends are the same so they can be reused if necessary.

Installing the power steering rack is a simple four bolts. BUT that;'s only half the story!

You'll need all the other parts of the system, the pump, brackets, pipes, tank, fluid and a belt, of course.

Here's what the rack, just installed looks like. This pictures shows just the rack installed and is waiting for the other parts to be added.

Once all the other parts are installed, there's the final test and leak check.

Typically, this work takes between two and three days.

* Price is subject to the availability of a used power steering system, which is becoming extremely difficult at the moment.

We can remove your power steering and replace the rack with a manual rack too. Our price includes all parts and labour but we keep the power steering system, rack, pump, mounts etc.