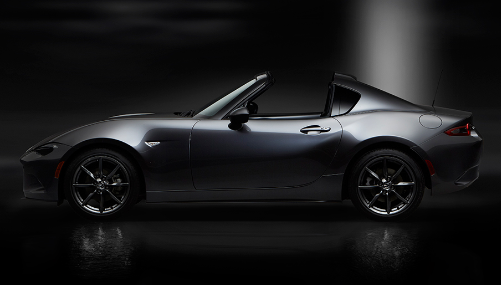 Mazda have finally announced the prices and the first delivery date of the long awaited MX5 RF after it being shown at the New york Motor Show last year and the Goodwood Festival of Speed this year!

Let's get the easy bit done first - First deliveries are due on the 4th March 2017!

Prices are a little bit more complex. In summary, you will pay a wapping £2000 extra to have the RF Coupe car over what you'd pay for the soft-top version.

The top of the range RF Launch Edition will be almost the same price a Abarth 124 Spyder. That'll make it quite a difficult choice at the top end level.

BUT over 80% of Mk3 MX5 have been sold in the hard-top / open format (UK and US) so we doubt the price difference will change many peoples minds!

Will it be worth the extra money? Maybe if it is quieter on the motorway, if you do that sort of mileage. BUT a sports car, is an open car!